4 Reasons Why Rideau Canal is the Best Place to Run

Since moving to Ottawa, I have fallen in love with running on the Rideau Canal.

Canada is a big and beautiful country. We are also blessed with beautiful cities that have wonderful places to go running. Vancouver has the Stanley Park Sea Wall path (amongst many others), Calgary, Edmonton, Saskatoon, and Winnipeg all have beautiful river settings. Toronto has the shores of Lake Ontario and its ravine system. Montreal has the Mount Royal Mountain. Quebec City has the Plains of Abraham, and Atlantic Canadian cities, I am sure, have many fantastic, beautiful running settings (though I have not spent much time in Atlantic Canada, but hope to very soon). I have been fortunate to spend time living in some of the cities mentioned above and have enjoyed visits to other cities where I went running. Since moving to Ottawa, I have fallen in love with running on the Rideau Canal. Below, I will present some of the reasons why I think it is the best place to run, within a Canadian city. 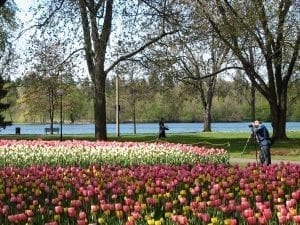 Running on the Rideau Canal is a feast for the eyes. At the northern end of the canal pathway, one can see the Gatineau hills and ponder what a day of mountain biking, swimming, or cross-country skiing might be like. The cliffs below the Parliament and shoreline of the Ottawa River offer beautiful vistas. The flow of the Ottawa goes faster as it navigates the islands at the foot of these cliffs in between the bridges reaching from Ottawa to Gatineau. As one travels south along the canal, there are beautifully maintained gardens, trees, and parks. Dow’s lake is a tremendous place to stop and look at all the beautiful surroundings Ottawa has to offer runners and non-runners 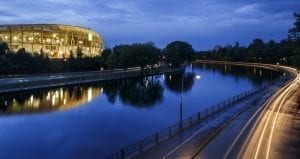 Wow! Ottawa has a lot of beautiful buildings and structures. I am no expert on architecture, but it is easy to tell what is great and impressive. The Parliament buildings alone are spectacular. I highly recommend the view from behind the National Gallery of Canada (not to mention that building itself) in the morning or evening (where one can see the sunset over the river). When I get the privilege to see boats coming up or going down the Rideau locks, I am overblown with interest in the work and ingenuity that went into building what is now recognized as a UNESCO world heritage site. As one runs south along the canal, the houses in old Ottawa and the Glebe can easily cause one’s jaw to drop. The Heritage Pavilion at Lansdowne has quickly become one of my favourite buildings in the city as well. For new architecture, the stadium next to it is one of the nicest newer structures in Canada, home to the defending Grey Cup champion, the Red Blacks, and hosts of this year’s Grey Cup celebration. 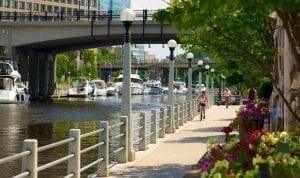 The Rideau Canal is the center of Ottawa. On many maps, it is often considered to dived east and west, and north and south in the city (depending on which part of the canal you are near). The Rideau Canal is easily accessible from the University of Ottawa, and for people who work in downtown offices, Parliament, or even those who work just across the river in Gatineau in the federal government buildings. While the Stanley Park seawall run in Vancouver and the Gatineau Parc trails contain some incredible views and terrain, they are often a considerable commute from where many people live and or work. The Rideau canal runs through or near many residential neighbourhoods and large volumes of offices. A convenient and good place to run is a significant attraction in a city like Ottawa.

The Rideau Canal is a vital artery for transport in Ottawa. In both the summer and winter, one can see citizens and tourists using the canal pathway (or skating rink) to get from point A to point B. The variety of city life found along this route can brighten any cloudy day. If you are new to Ottawa and want to feel like you are a part of this vibrant city, bring your bike or dog or just a comfortable pair of shoes and get trucking alongside the Rideau Canal.

I will concede, that if I had all the time in the world and unlimited resources, I would likely be found on some wilderness trail on the west or east coast, or in the Laurentien or Rocky Mountains. But we don’t always get the thing we desire the most, and while there are city pathways that have some good traits (the Vancouver Seawall does have spectacular scenery and beaches), the Rideau Canal ties a lot of positive traits into a recreation area that is unique for a Canadian city. If you already enjoy the Rideau Canal trails, revel in the pride of the high caliber fitness experience it affords you. If you have not, then get out and enjoy some lovely fall weather in the heart of Ottawa and see what all the fuss is about.